TopicsThermal images from the TIR suggest
Ryugu boulders may be "fluffy"

The first photographs from Hayabusa2 of the surface of asteroid Ryugu revealed a treacherous landscape, with large boulders carpeting the asteroid to form a rugged topology. Yet when the spacecraft turned on its thermal infrared imager (TIR), it saw a surprisingly homogenous surface in the thermographic images.

How effectively a planetary surface conducts and stores heat is measured by a property known as the thermal inertia. A surface with a high thermal inertia will gain and lose heat slowly, resulting in smaller temperature differences between night and day and summer and winter.

Thermal inertia depends on composition and also density. Boulders like those scattered over Ryugu are expected to be dense and should therefore have a high thermal inertia, changing temperature more slowly than the surrounding material. On the dayside of Ryugu, this would make the boulders stand out on the TIR image as cold spots. But this was not what was seen.

A paper published in the journal, Nature, this week (March 16, 2020) led by Tatsuaki Okada (ISAS & University of Tokyo) revealed the first global thermal image of an asteroid during a complete rotation, in addition to high resolution images taken close to the surface. This data captured by the TIR on Hayabusa2 showed little temperature difference between the majority of boulders and the surrounding material on the surface of Ryugu, pointing to a similar thermal inertia value of about 300 Jm-2s-0.5K-1 (300 tiu).


The implication is that Ryugu is covered with low-density, porous boulders that are surrounded by similarly porous fragments greater than 10 cm in size. Since the initial expectation was the asteroid should have dense boulders embedded in a layer of fine regolith, this is a startling discovery. The reverberations have important implications for how planets are formed.

Ryugu is an example of a C-type or Carbonaceous asteroid. C-types are primitive asteroids consisting of material that has experienced little change since the formation of the Solar System 4.6 billion years ago. This makes them important time capsules for the early days of planet formation, revealing the material that built the Solar System.

It is suspected that the carbonaceous chondrite meteorites found on Earth are fragments of C-type asteroids. The accessibility of meteorites makes these much studied objects for understanding the Earth’s earliest days. But these meteorites are significantly less porous that the majority of rocks on Ryugu.

The close-up TIR images captured during the Hayabusa2 descent operations reveal a few colder boulders with thermal inertia values corresponding to 600 - 1,000 tiu; a value more typical of the carbonaceous chondrites. But these dense additions are in the minority on the asteroid surface. 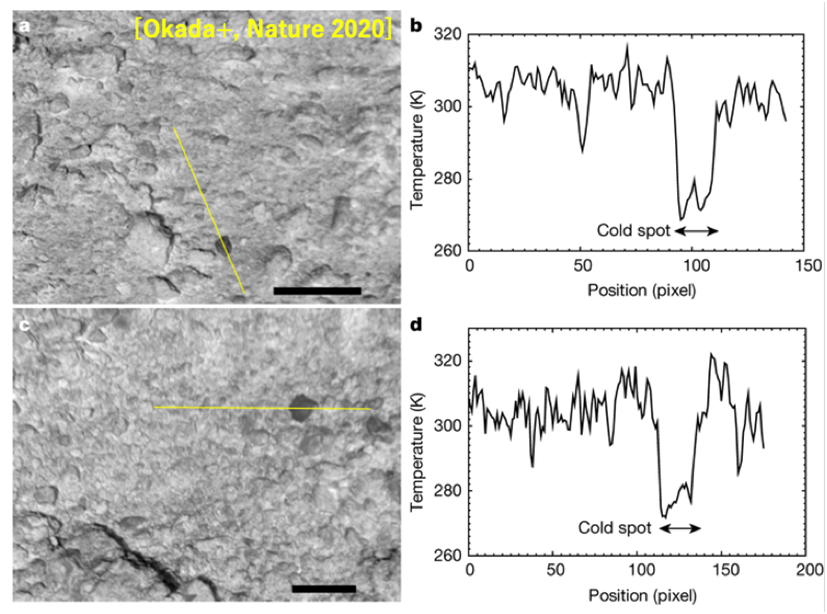 Cold spots discovered during close-up thermal images. These images were captured during the TD1-R1-A operation on the 15 October, 2018 from an altitude of 78.8m. The temperature profile along the yellow line is shown in the adjacent panel. The cold spots are colder by more than 20K, indicated a dense and consolidated boulder with high thermal inertia. Only a few cold spots (boulders) are found on the surface of Ryugu: other boulders have the same temperature as their surroundings. Scale bar is 5m in panel a and 1m in panel c.


One possibility is that C-type asteroids may have a far less consolidated nature than expected, consisting of a loose conglomerate of fluffy dust and pebbles. Ryugu would then be a fragment from such a porous parent, with a handful of denser boulders that were formed in the deepest part of the parent asteroid, or even had a separate origin and were delivered to the asteroid during meteoritic impacts.

These fluffy asteroids would struggle to survive the high temperatures and shockwaves experienced during a descent through the atmosphere of Earth, resulting in meteorites that consist of only the dense minor components of the asteroid.

Formation scenario for Ryugu from a porous parent body. (1) Formation begins with the fluffy dust in the Solar nebula. (2) Porous planetesimals were formedr through accretion of dust or pebbles. (3) The parent body of Ryugu may have remained porous owing to a low degree of consolidation. A clear boundary at the inner core is illustrated here, but a gradual increase of consolidation by depth might also have occurred. (4) Impact fragmentation of the parent body, with a few large fragments forming the boulders on Ryugu. (5) Fragments re-accrete to form Ryugu, with porous boulders and sediment on the surface and a small number of dense boulders originating from the parent’s inner core. (6) Re-shaping during a rapid rotation phase created a double-top-shape.


If this fluffy composition was typical of the material that built the planets, then the growth process that took the Solar System from dust to planets might be very different from models that assume a more rigid building material. For example, the result of impacts between porous planetesimals may prove to result more often in coagulation than fragmentation, allowing for a swifter growth and altering the time-scale for planet formation.

It is also possible that Ryugu's porosity may be due to a composition of completely different materials to the carbonaceous chondrite meteorites. For example, the asteroid could consist of carbon-rich material similar to that discovered on comet-67P/Churymov-Gerasimenko. This will ultimately be resolved when Hayabusa2 returns to Earth at the end of 2020 with samples of both surface and subsurface material.