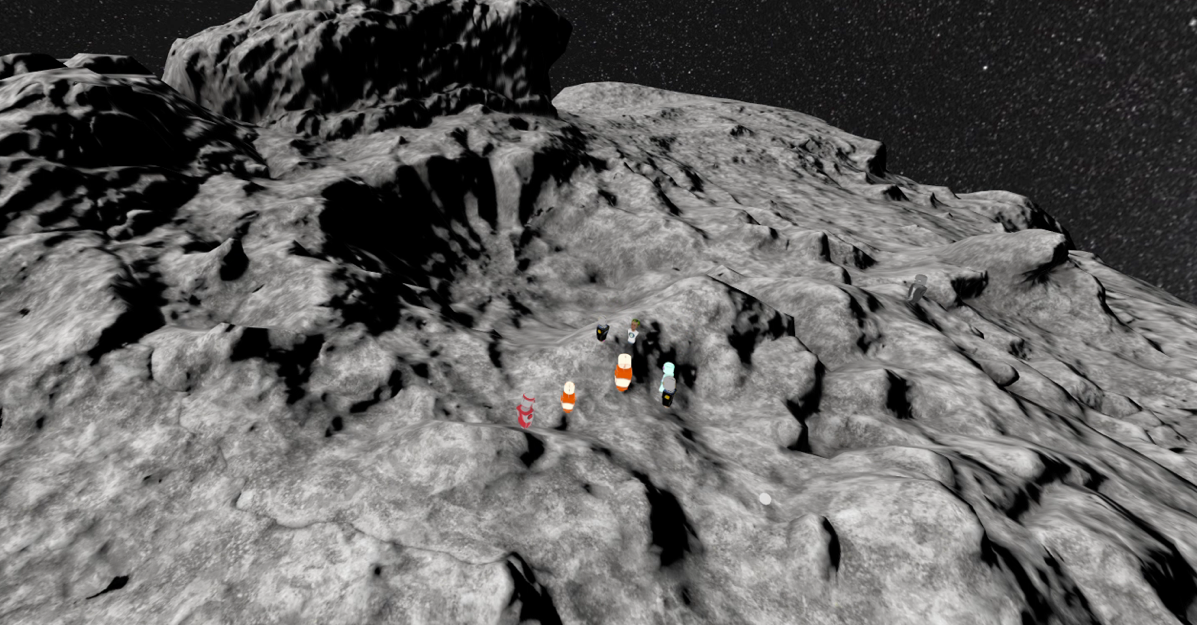 
It has been nearly two years since June 2018 when we saw asteroid Ryugu come slowly into view. The images returned from Hayabusa2’s onboard cameras were astounding, revealing a tiny world pitted wth deep craters and jagged rocks. But have you wondered what it would be like to go one step further, and stand amidst the boulders and craters of Ryugu’s craggy surface?

Due to the distances and dangers involves, walking on another planetary body is immensely challenging. Only a few humans have ever ventured beyond the Earth, and even these astronauts have never travelled as far as an asteroid. But with the detailed images returned from missions such as Hayabusa2, a new possibility is being developed: the chance to visit these worlds through virtual reality.

Virtual reality or VR has traditionally conjured up images of computer games. But the ability to immerse yourself in another environment has great potential for research, education and outreach. Within VR, you can lift and rotate objects, gain a 360 degree view of any surroundings and simultaneously interact with other people in the same space. It is similar to meeting in person, except you can visit outer space without leaving your living room.

Handling space probes in virtual reality. In VR, we could pick up and examine the models of MASCOT and the MINERVA-II-1 rovers. (Movie)（© OmniScope / JAXA）


As the global pandemic is forcing many of us to self-isolate, this seemed the time to test how effective VR could be at bringing people together. With a group of intrepid students from the Yokohama International School, we went on an interactive tour of the Hayabusa2 mission.


Montage of the virtual reality tour with students from the Yokohama International School. (Movie) （© OmniScope / JAXA）


The most immersive way to experience virtual reality is by using a headset that allows you to look freely in all directions. However, the need for special equipment can also be barrier to participation. For this reason, our tour used Mozilla Hubs, an open source VR meeting space that supports cross platforms from computers, tablets and mobile devices in addition to all VR headsets. The students joined through a web browser on their own computer, which also allows you to look in all directions and interact with objects.

Our tour started in a room that looked like a normal meeting space. It was actually a replica of the interaction area at the Earth-Life Science Institute in Tokyo. Sitting on one of the room’s tables was a large model of Hayabusa2, while on another table were models of the European MASCOT lander and the two MINERVA-II-1 rovers. To create special scenes and assets for this project, we worked with OmniScope, a new start-up focussed on visualisations in VR.

We began by discussing the mission, and the possibility that carbonaceous asteroids such as Ryugu could have delivered water and organics to the early Earth. Standing together in the room, we watched an animation of the sample collection by the Hayabusa2 spacecraft. We then examined the spacecraft model to see the sample horn, and where the reflective target markers were stored onboard before being dropped to guide the spacecraft safely to the surface.

We could also see where MASCOT and the MINERVA-II rovers were stored, which brought us to the models of these landers and how they moved across the low gravity surface of the asteroid. The models could be picked up by everyone in the room, turned and rotated to see the details for their design.

Before the launch of Hayabusa2, asteroid Ryugu was known only as asteroid 1999 JU3. The name was chosen from suggestions from around the world during the spacecraft’s outbound journey. The chosen name, Ryugu, comes from the Japanese folktale of Urashima Taro; a fisherman who visits the underwater palace of Ryugu-jo on the back of a sea turtle. 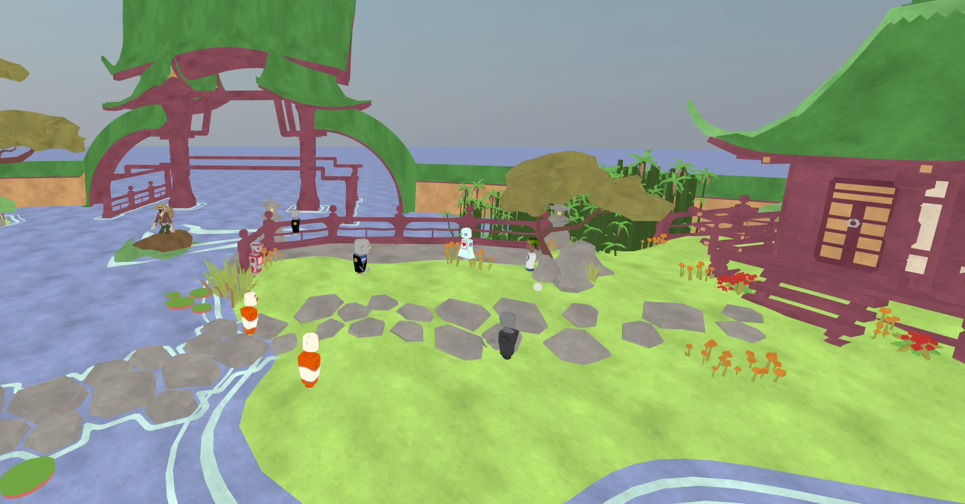 Virtual reality tour: the underwater palace of Ryugu-jo from the folktale of Urashima Taro
（© OmniScope / JAXA）


As we discussed the story, the scene changed around us. Leaving behind the meeting room, we moved to stand on the grounds of the underwater palace of Ryugu-jo, where Urashima and the sea turtle have just arrived. We discussed the significance of the tale to Hayabusa2 while admiring the palace grounds. Urashima had returned from the palace with a box that turned out to contain his old age. When Hayabusa2 returns to Earth, it too will carry a capsule that will contain evidence of our planet’s own history.

Then we left the underwater palace of Ryugu to stand on the surface of asteroid Ryugu. The dark rocks and crevices around us were a new virtual reality visualisation created by OmniScope, who used photographs from the Hayabusa2 mission to create a three-dimensional landscape of Ryugu’s surface near the first touchdown site. Moving around the scenery, it was clear that finding a safe landing spot was extremely challenging amongst the boulders that towered above us and the uneven footing below. Standing at the site of the first touchdown, we watched the sequence of images captured by Hayabusa2’s CAM-H, which looked directly down the sample horn as the spacecraft reached the surface.

Virtual reality tour: watching the video form the first touchdown while standing on the same site on the surface of Ryugu. （© OmniScope / JAXA）


Our whole group enjoyed this experience. Speaking afterwards, Simon Lorimer, physics teacher at the Yokohama International School, described it as “spectacular and fascinating” noting that is was particularly interesting to see and handle the spacecraft from the mission while hearing about their use.

Interest in different online interaction possibilities has recently increased, both due to necessity brought about by the current pandemic, and also through consideration of the impact of travel on climate change. But our experience with this VR tour of Hayabusa2 suggests that virtual reality can be more than a compromise solution to meeting in person. With VR, we can explore locations unreachable on Earth and take this tour form our own living room, wherever this happens to be in the world.