TOPICSA sunburned Ryugu: the asteroid surface
has been weathered by the Sun!

New information about the surface and orbit of Ryugu has been uncovered from analyzing data obtained during touchdown and the global observations performed by the asteroid explorer, Hayabusa2. These findings have been published in the electronic version of the US scientific journal Science, on May 7, 2020 (May 8, JST: Morota et al, 2002). The paper was led by Associate Professor Tomokatsu Morota from the University of Tokyo and member of the Hayabusa2 science team.


On February 22, 2019 (JST), Hayabusa2 successfully completed the first touchdown to sample materials from asteroid Ryugu. The extremely high-resolution images acquired during touchdown revealed a large quantity of reddish-dark particles thrown upwards with the rocks. It is thought that these particles had been adhered to the surfaces and inside pores of rocks but were disturbed during the impact of the bullet and thruster jets during touchdown.

These reddish-dark materials are sparsely distributed in a depth ranging from Ryugu’s surface to a few meters. The interiors of older craters also appear reddish-dark, while younger craters have a bluer interior than their surroundings. From comparison of the age of these craters, surface reddening of Ryugu occurred during a short period between 300,000 and 8 million years ago. The interiors of craters formed before this period turned reddish-dark along with the asteroid surface, while younger craters were evacuated after the red material had formed and exposed fresh interior rock unaffected by the coating. The best explanation is the reddish-dark material was created when the surface of Ryugu was burned by the Sun.

This suggests that Ryugu was in an orbit closer to the Sun in the past. As both reddish-dark material and the unaltered blue-bright material were present on the surface at the landing site, it is expected that both the altered and unaltered materials have been collected.


The observations from Hayabusa2 reveal that the surface of Ryugu was covered with rocks, and the existence of fine particles such as those found on the lunar surface could not be confirmed. Hayabusa2 performed the first touchdown on February 22, 2019 (JST) to collect samples from Ryugu. Figure 1 shows an image captured with the Optical Navigation Camera – Wide angle (ONC-W1) during touchdown. Figure 2 is a movie showing the images taken with both ONC-W1 and the small monitor camera (CAM-H). Figure 3 shows a movie captured only with ONC-W1. 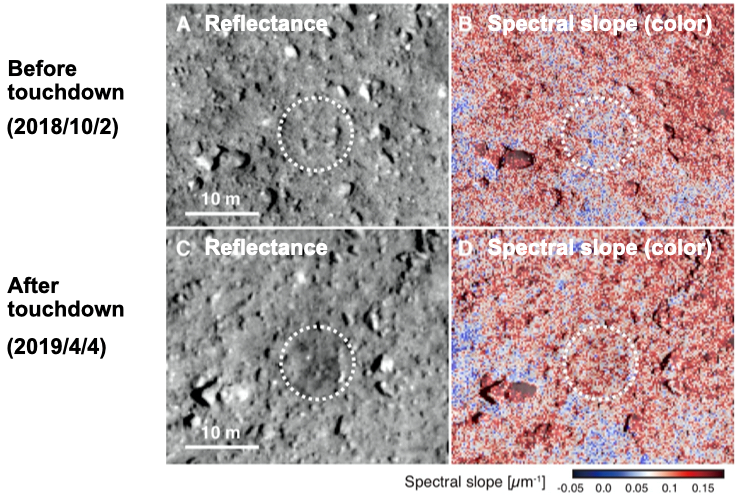 
Global observations show that the surface of Ryugu is slightly blue-bright at the equator and reddish-dark at mid-latitudes. The poles are also particularly blue-bright (Figure 5). Detailed observation of colors inside craters superposed on craters shows that the color distribution inside the relatively older (lower) crater has the same redness as the surroundings. Within the upper (younger) crater, the inside is bluer than the surroundings (Figure 5). This suggests that there was an event in the past that turned Ryugu’s surface red. The red craters were formed before this event, while the craters with a bluer interior were formed after the reddening of Ryugu’s surface occurred and exposed fresh bluer materials within their base. Both the latitude dependence of the red distribution, and the clear division between red and blue craters, supports the idea that the reddening event on the surface of Ryugu was caused by heating or weathering by the Sun and happened in a short time period. 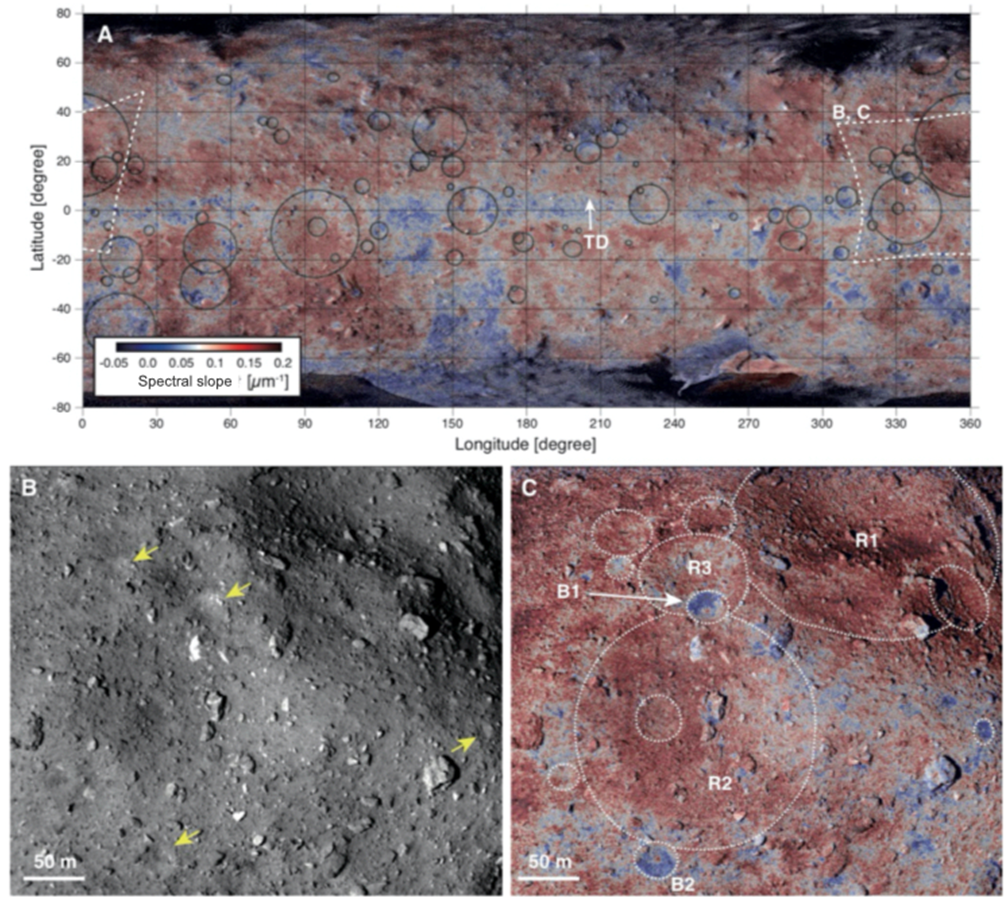 Figure 5: Map of variations in the spectral slope of the reflectance spectrum on the surface of Ryugu. The black circles in (A) and white circles in (C) denote the craters. The B1 and B2 craters, which have blue interiors, lie over the other craters, indicating that these are young craters.
(Partially modified from ©Morota et al., 2020.)

■Ryugu’s past approach to the Sun


These observations suggest that Ryugu was temporarily on an orbit that approached the Sun in the past. The blue craters were formed after the surface reddening, so based on their number density, we can infer the age of the surface reddening. The resultant date is estimated to be between 300,000 and 8 million years ago. Figure 6 summarizes the evolutionary history of Ryugu, based on these results. 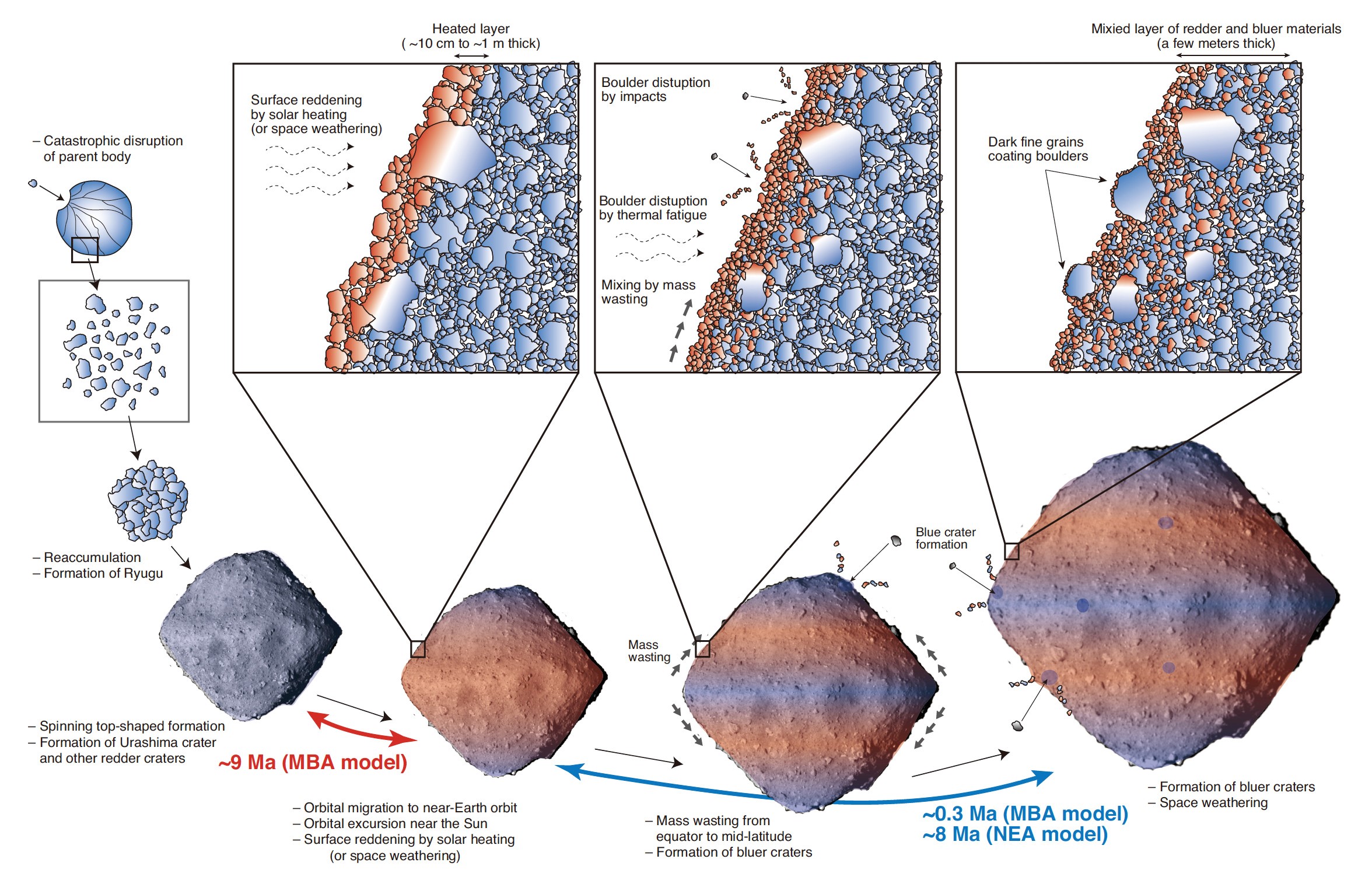 The reddish-dark particles observed during touchdown are believed to have been crushed material that had been altered during a past approach towards the Sun by Ryugu. As both reddish-dark material and also blue-bright material were on the surface at the landing site, it is expected that both altered and unaltered materials were collected.

This figure shows an approximate image of how the orbit of Ryugu changed in relation to its evolution shown in Fig.6. Although Ryugu was formed in the astroid belt, the perihelion (point closest to the Sun) of its orbit changed to move near the orbit of Mercury. The orbit later evolved again to become the current path of Ryugu around the Sun. (© University of Tokyo, JAXA)