An important science goal for the Hayabusa2 mission is to map the history of asteroid Ryugu. As a primitive carbonaceous asteroid from the early days of the Solar System, Ryugu’s life traces the movement of ices and organics; the ingredients for habitability.

With the majority of information about the asteroid gathered from detailed observations, a key question for constructing a chronology is the age of that observed surface. Dating of surfaces of celestial bodies is done by counting the size and frequency of craters. Comparing such counts with the expected rate of impacts yields a value for the surface age.

However, these age estimates can be very uncertain. The first assessment of the Ryugu surface suggested the asteroid had stayed in the asteroid belt (where collisions mainly occur) anywhere between 6 million and 200 million years: a range covering over an order of magnitude. This uncertainty is due to not knowing how the material of Ryugu’s surface responds to an impact. In particular, what force stops a crater growing?

When a crater cavity forms, it must fight against the mechanical strength of the rock to break it apart, and also gravity that resists material being thrown outwards. Which force ultimately determines where the evacuation of the surface stops affects the size of the final crater. The sizes of craters that cover a surface therefore depend on if crater generation is strength limited or gravity limited and an accurate assessment of age requires knowing which is dominating.


On Earth, craters with diameters more than a few 10s of metres are gravity dominated. Ryugu’s gravity is much lower at only approximately 0.00001 G (1 G = Earth gravity), but its surface material may also be weak, resulting in no obvious winner between the two forces.

ONC images of the SCI crater. (A) The area prior to the impact, taken from an altitude of 1.72km. MB marks the Iijima boulder, SB is the Okamoto boulder. (B) Same location after the impact. (c) SCI crater is marked with the yellow semi-circle and the white box is the region shown in (D) with the small pit marked. (Figure 1 in Arakawa et al, Science 2020.)

A before & after comparison image of the area where the impactor (SCI) hit the asteroid surface. (comparison between A and B of the images above)


Models and simulations of crater formation highlight differences in the velocity and distribution of ejecta generated in both the strength and gravity limited scenarios. But to observe this, the crater-forming process has to be caught in action. This was achieved on 5 April, 2019 when Hayabusa2 released the small carry-on impactor (SCI).

In a paper published today (19 March, 2020) in Science Magazine, a team led by Masahiko Arakawa (Kobe University) scrutinised the formation of the SCI-generated crater for evidence of the forces dominating the evacuation.

The SCI is a 2kg copper projectile that struck the surface of Ryugu at a speed of 2km/s. While the main spacecraft moved away from the impact site to avoid the resulting debris, the collision was observed by a deployable camera, DCAM3. Three weeks later, the new crater was imaged by the onboard telescopic optical navigation camera (ONC-T) as the spacecraft descended to 1.7km over the impact site. 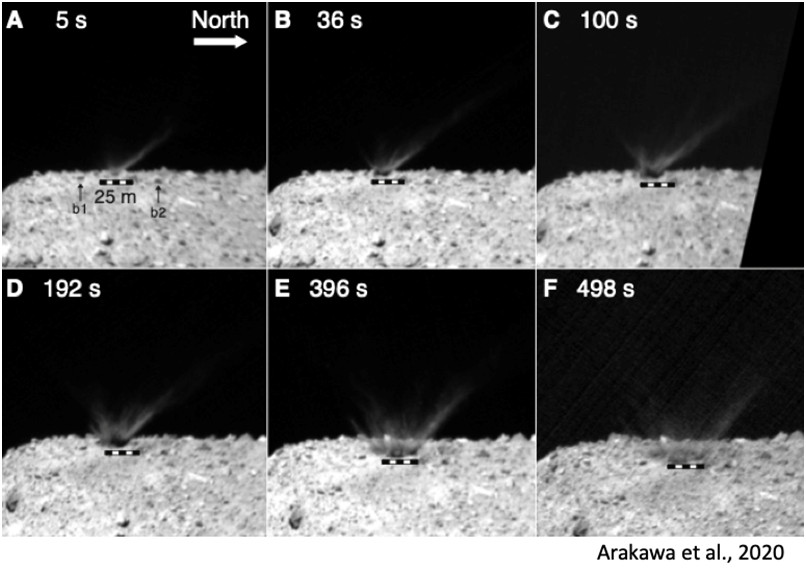 DCAM3 images of the SCI impact at different elapsed times after the collision (Figure 3 in Arakawa et al, Science 2020).

The heavily bouldered surface of Ryugu prevented the creation of a symmetrical crater. The SCI impact moved dozens of these rocks, including the 5m Iijima boulder, which was shifted 3m to the north-west of its original position. However, the Okamoto boulder to the south remained immobile and seems to have blocked crater growth. The result was a semi-circular crater with the ejecta thrown towards the north-west. Observed via the DCAM3, the ejecta itself was split into rays by boulders that blocked the evacuation flow of material.

Measured across at the original surface elevation, the new crater was 14.5m in diameter and 17.6m when measured across the raised rim. This is seven times larger than the crater generated in a similar impact on Earth, due to the much weaker gravity and surface strength. A small pit was also formed close to the impact site, implying that Ryugu may have a layered structure, with a harder layer containing the pit overlaid with a fluffier surface material.

(A) DCAM3 image of the ejecta created during the SCI impact, with four separate rays of material. (B) ONC optical image of the impact site, with numbers corresponding to the ejecta rays in (A). (C). Change in reflectivity before and after the SCI impact. Darker regions are thought to indicate material ejected from below the surface. (Figure 4 in Arakawa et al, Science 2020.)

The ejecta observed by DCAM3 provided two vital clues to the forces at work. Firstly, the curtain of ejecta remained attached to the ground. Previous laboratory experiments suggest that this is seen when gravity is limiting the crater evacuation, but not in the strength-limited case. The second clue was material in the ejecta was at least partially deposited on the crater rim. Models of the velocity of such evacuated particles suggest this is also a sign of gravity-limited crater formation.

For the weak gravity of Ryugu to be dominating the crater formation process, the asteroid’s surface material must an extremely low strength. A comparison would be a cohensionless material such as sand, whose strength originates from friction that depends on the (weak) surface gravity.

Scaling laws that predict crater size suggest that the SCI should generate a crater with radius 6.9 - 7.7m in the case where gravity is dominating. This agrees well with the apparent radius of 7.3m.

If the size distribution of craters on Ryugu’s surface is determined by gravity, then the asteroid’s surface age is at the younger end of the predicted range. The SCI experiment suggests Ryugu stayed in the asteroid belt for between 6.4 and 11.4 million years. After this time, the orbit of Ryugu would have changed as it entered the inner Solar System to become a Near-Earth Asteroid (NEA). In this more empty part of space, collisions become far less frequent and it becomes hard to judge the passing of time. Roughly speaking, NEAs are estimated to exist for about 10 million years.

There is one caveat. Any major change in surface topology that erases old craters effectively re-sets the surface age clock. It is therefore not possible to tell if 10 million years has passed since Ryugu was first formed, or if this has been the time since a global resurfacing event. Distinguishing between these scenarios will be the subject of future work on this fascinating asteroid.